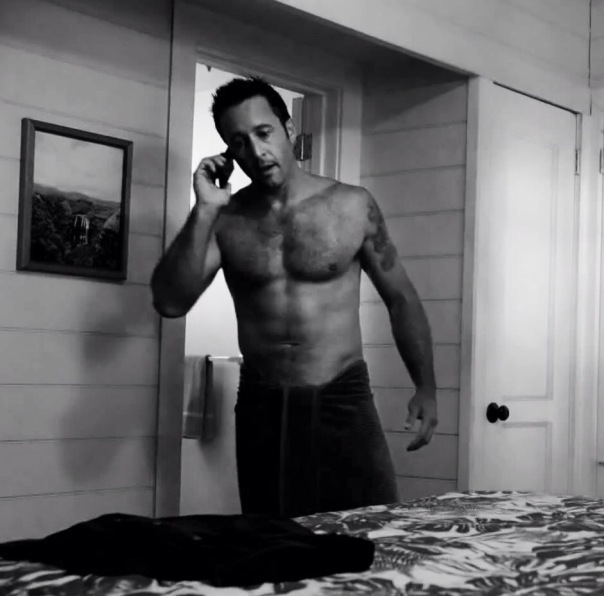 This is a fan fiction of “Hawaii Five-0” it contains sex so if you are underage do not read it.
“Ok, I’m gonna check this out, I’ll pose as a client, and I’ll do the arrest as soon as someone makes a move on me” Steve said. The rest of the team nodded. The parlor was in a very subtle building, it seemed like a regular massage parlor, but Five-0 had information that they had gay guys who would go with clients. Steve entered the parlor. He walked towards the reception. A kind Hawaiian woman stood there, she smiled politely as she checked out his muscular lean body. Steve wore a dark blue polo shirt, the buttons unbuttoned, and of course cargo pants.

“May I help you?” She asked

” Regular or Special sir?” she asked, it was obvious that “special” meant fucking.

“I’ll take the special” he said. She smiled shyly.

“Top or bottom?” She asked

Steve seemed to be confused, he didn’t understood what she was asking.

“What do you mean?” he asked

“It’s your first time huh? Well you want to fuck or to be fucked honey?” she asked. Her voice was so nice that even the dirty words sounded quite good.

“Do I seem like I want to be fucked?” he asked, feeling his testosterone kicking in

“I have seen a lot in this business, just because you don’t look gay, doesn’t mean you aren’t” she said, Steve nodded.

“I want to fuck” he said, and felt aroused about this whole conversation.

“It’s 100$, go to the room in the right, take of all of your clothes and lie on the table, Kyle will be with you shortly” she said. Steve did as he was instructed. He went into the room and removed his clothes. He just left his boxers on. He sat on the table and waited.

“He seems like a cop” the receptionist said to her boss

“Ok send Kyle, and tell him to get fuck hard, if he makes that cop fuck him, he cannot arrest us” her boss said.

“Man you’re hot, lie down” he said to Steve

He lied don’t on his back. Kyle oiled his hands up and touched McGarrett’s hairy chest, his pecks were so muscular that Kyle didn’t move for some seconds so he can enjoy it. Steve was taking deep breaths feeling more and more aroused as Kyle rubbed his chest and then his abs. Then he returned to his nipples and almost pinched them. Steve’s boxers couldn’t contain him anymore. His hard cock made his underwear look like a tent. Kyle smiled. “Now you won’t be able to lie on your stomach” he said. “Ok now I’m going for your legs, keep your pecker in check” Kyle said. Steve felt Kyle’s hands, caressing his legs, and then he touches his packege.

Kyle grabbed Steve’s underwear and removed it slowly, Steve enjoyed this more than he’d admit. His cock was free, standing upright, and having it’s throbbing veins hugging it. Steve’s pubic hair were trimmed but not shaved, and that made his physique more natural and appealing. Kyle moved his oiled hands to McGarrett’s big balls, maybe it was the oil in his hands or that Kyle knew how to massage properly but Steve, decided to not call it in. He was supposed to arrest everyone the moment they would go towards sexual acts, but he loved how Kyle’s hands rubbed his balls. Steve placed his hands under his head and smiled in bliss, as Kyle touched his shaft and stroked it.

“You’re driving me crazy, you know that?” He said

“You have a big cock sir and it’s beautiful too” Kyle replied.

“Why don’t you show me how much you like it?” Steve said.

Kyle leaned and licked from the base of the cock towards the tip of the glans. Making Steve moan loudly. He played with his tongue teasing Steve’s glans. He could feel his cock getting harder on his hands. He opened his mouth and took it all in. Steve moaned excited that his cock could fit into this Kyle’s mouth.

He could feel his tongue moving and causing ripples of pleasure on his cock.

“Suck it champ!” Steve said while he placed his hand on Kyle and pushed him towards his manhood.

“Yeah that’s right, that’s how you serve men! Fuck!” he said as his balls twitched

His whole body was tense, he pushed his waist upwards while holding Kyle’s head.

Kyle’s breaths turned Steve on. “Suck it!” he groaned as Kyle worked his tongue around Steve’s luscious cock.

“Come on let me fuck you!” Steve said and stood up. Kyle showed his smooth ass, he wore a string and he played with it while Steve watched with a smug smile on his face.

“Do you have a condom?” Steve asked. There was no way he would fuck this cumdump boy without protection. “I’m clean but here is is” Kyle said and placed the condom on his lips. Then he got on his knees and rolled it with his lips all over the length of McGarrett’s manhood. His thick veins were visible even under the latex.

“Now bend over and grab onto something” Steve said. Kyle have heard many men saying it, but only a handful were really good fuckers. Most of them just rocked him back and forth pushing their small cocks inside Kyle’s ass. But no, Steve’s cock wasn’t small at all. It was a cock, if it was a gun it would be a magnum.

He felt Steve behind him as he was positioned with his ass up bending on the table.

He could hear him breathing slowly. Then he felt his cock entering his ass.

It was so thick for Kyle’s ass that Kyle felt uncomfortable as he was being penetrated by it. He felt his ass stretch like the first time he was fucked by a man.

Steve could see his was uncomfortable because Kyle kept trying to reposition himself, as if that would make him less uncomfortable, somehow that was arousing for Steve. He slowly pushed the last few inches inside Kyle. Kyle’s butt like cushion put a stop to the rest of Steve’s groin. Kyle loved that feeling of another’s man’s body touching him like that. Steve retracted back, slowly pulling his cock out of the depths of Kyle’s ass. Kyle let a moan escape his lips as he felt the friction by their skins. Steve pushed back in again, then retracted again. Each time a bit faster. Until he was pounding Kyle.

Kyle bit his lip trying to withstand the powerful man fuck him. Like a stud. The pain in his ass caused him pleasure. He was panting trying to withstand the thrusts Steve gave him. Kyle couldn’t take it anymore, he let himself free and cried out, in pain? In excitement? Both? He couldn’t even tell, he just had to scream. Steve leaned closer now, and his hairy chest touched Kyle’s back. Steve’s skin was sweaty, sticky and hot. It felt so good against Kyle’s back. Kyle felt Steve’s tongue licking his ear as he was fucking him, thrusting his waist and pinning Kyle hard, he stayed there, as Kyle moaned loudly blowing his load. He had never been fucked so hard that he would orgasm. He always needed someone to jerk him off, but now he didn’t event touched himself. “On your mouth now!” Steve ordered and Kyle feeling sore on his butt got in his knees. Steve pulled his condom off “Jerk me off” he said. Kyle grabbed his hit cock and jerked it, while he had his face close to Steve’s cock. He felt in his hand a small tremble that begun from McGarrett’s balls and went through his manhood. Rivers of manhood juice flowed on Kyle’s face and mouth as Steve pushed his waist outward and and cried out loudly. His cock released sperm like a volcano, running down his cock while he kept coming more and more. Kyle sucked every last drop.

“I was here to arrest you” Steve said

“I won’t, not after this, after this, I’m gonna be a regular to you, until your ass is big enough” Steve said

“Anytime Commander” Kyle said while Steve buttoned his shirt and was ready to leave.

“Not anytime, every night Kyle, I’m gonna make you cry more with my cock” Steve replied and winked at him.